Forget the hassle of what’s for dinner tonight. This middle eastern comfort shakshuka, is very welcomed to be at your dinner table more often than a satisfying breakfast meal.

If you think preparing breakfast dishes for afternoon and evening meals looks oddly indulgent, then you better get out your pajamas and feel comfort to dig in.

Eating breakfast for dinner is a traditional way many middle eastern enjoy all over the levant countries, where the main course meal commonly offered at lunch time, while the dinner is usually the lightest meal.

Lunch is the meal where all the family gather around the table, which is usually consists of a choice portion of meat, chicken or fish, a portion of rice or grain, and a portion of cooked vegetables. In addition to salads and soups that sometimes offered as part of mazzi, and always accompanied with a kind of bread or pastries.

At dinner, a healthy light meals offered, usually egg dishes like shakshuka and eggah, even the basic fried egg (my kids humbled dinner), salads and soups or light appetizers, also dishes like falafel and hummus, shawarma, and light sandwiches are on the top picks.

How often do you like to eat breakfast for dinner? What’s your favorites?

Shakshuka basically is eggs cooked in spicy tomato sauce, a well known middle eastern dish that originally comes from Tunisian, Libyan and Moroccan cuisine. Usually enjoyed at supper time as well as a breakfast meal. There are more versions of shakshuka recipes, this one is the basic, where some other recipes replace the tomato sauce with other vegetables from spinach to cauliflower and fava beans to artichoke, and the potato version is one of my favorites.

Heat the oil in large deep skillet, sauté the onion for 1 min then add the garlic, lightly fry. Add the tomato and the green pepper, season with salt and pepper, add the cumin and cinnamon, cook for about 15-20 min over low heat, check the seasoning, the sauce should be strong and piquant flavor.

Break the eggs one by one, and slide into the tomato sauce, arrange the yolk around the pan. Continue cook on low heat until the egg whites set about 7 min, you may Partially or completely Cover the skillet to let the eggs cooks very well, and it depends a bone your liking if you want the yolk to be a little watery or hard, and to prevent the sauce from spraying all around the cooking place.

Enjoy the spring with this fresh and sweet rhubarb berry crumble.

It’s only the WILL! And God mercy at the beginning.

We’re as powerful as we want to be!
How close we are to success is how confident we are.

Yes, It’s my blog anniversary. My blog is turning two this april, I can’t believe the days just went by so quickly, and here I am… still enjoying the love of making, photographing, and sharing food with you friends.

Yes, I remember the last time I was out for a couple of months and was going to quit blogging, but thought to give myself another chance, and with some friends courage, I returned, and promise to keep up as long as I can.

This semester I didn’t take classes toward my biology master degree, but the coming months will be so hard that I need to manage the time between studying, posting recipes, and my house duty. So please be patient with me.

Todays recipe is pretty sweet, delicious and makes a good dessert in any season and occasion. The best part that it’s so easy to make and so so yummy…
To celebrate the spring I used rhubarb with fresh strawberry and raspberry, the blends are gorgeous sweet and sour, flavored with some sprinkles of rosewater, makes the berry heavenly aromatic and adds a lot to delicious berry taste. All topped with a crunchy nutty layer of oats that screams buttery flavor.

Preheat oven to 375 degrees F (190 degrees C). In a large bowl, mix white sugar, 3 tablespoons flour, strawberries, raspberries, and rhubarb. Add the rosewater and mix. Place the mixture in a small ramekins.
Mix 3/4 cup flour, oats, brown sugar, and Butter until crumbly. You may want to use a pastry blender for this. Crumble on top of the rhubarb and strawberry mixture.

Bake 45 minutes in the preheated oven, or until crisp and lightly browned.
Enjoy with your favorite ice cream, and sprinkle some crushed pistachio on top.

Ghraybeh [ghray-beh] or ghreybey is a soft middle eastern butter cookie garnished with pistachios, and it is also referred to sometimes as a sugar cookie or wedding cakes. It is so soft and delicious, due to its abundance in butter ghee and powder sugar, has a distinctive smooth taste that melts in your mouth in seconds.

It is popular in many Middle Eastern countries, especially in Lebanon, Syria, Jordan, Palestine, Egypt, and the Gulf region. It is also popular in Turkey, Morocco and Greece.

To make Ghraybeh, the dough is first prepared by creaming butter ghee (sometimes use half butter half margarine) with powder sugar, mix in flour and a hint of rosewater or orange blossom water, but you can add vanilla if you like. Small pieces of dough are then cut and rolled by hand to form circular shapes. Whole pistachio pieces are added for garnish, and the dough is baked on medium temperature for 10 minutes. They must remain pale, almost white, to keep their delicious taste and tender.

The cookies come in many shapes – rounds, crescents, diamonds, or S shapes.
It is a cookie best served with coffee or tea.

Cream the butter and beat in the sugar for about 3-4 min. Until it is smooth cream, add the rosewater.
Gradually, mix in the flour, with hands, mix well until combined, the dough should be soft and pliable when shaped into a ball. If required add 1 -2 tablespoon of flour.
Cover the dough and let rest in the fridge for at least 1 hour. heat the oven to 300 f.

Take a small amount of the dough, the size of walnut, roll in your hands and shape into a ball, then flatten slightly with your balm, in the middle press a pistachio nut into the dough. Arrange them on a baking sheet a little apart from each other bake for 10 min.

Do not let them overcook, they must remain white. Let them cool completely before you try to move them.

Creamy garlicy hummus combined very well with richy lemony flavored tuna topped on toothsome crunch of the crostini, all in one bite.

Did you see “THE CROODS” movie? what’s the most funny scene you liked?

Last weekend, we had a chance to see “THE CROODS” movie. Honestly, I wasn’t so excited about it at the beginning, but the kids insist to go see it, and since there is nothing to do -especially in rainy days- but the movie theatre, so we went. Believe me, it’s a perfect family movie that isn’t just for the kiddos.

incredibly funny, it just looked silliness from start to finish, but also delivers a sweet message about families and how change can be a good thing. It captures the wonder (and more gently, the anxiety) of discovery time and time again. It holds a very heartfelt message about not fearing everything that’s new and stands different before the norm. Valuable insights about seeing possibilities instead of risks and letting the wondrous power of ideas, as opposed to the cave dark’s status quo, lead the way towards enlightenment.

“The Croods” is about a family of cavemen who forced to come out of their cave and start living in the world. Grug (Nicolas Cage) is the father and he wants the family to live in fear, he has thereby a valid reasons for his overprotective rule – no one gets to leave the safety of the cave that constitutes their home. “New is never a good thing”, as he stipulates repeatedly with a decided undertone of fear.

But his oldest daughter Eep(Emma Stone)-the self-dependent teenage daughter- longs for a life outside the cave, has grown tired of their eventless existence. She wants to get out and explore. Live, instead of just surviving. One day meets a boy named Guy(Ryan Reynolds) who shows her the light, introducing such revolutionary concepts as making a fire and cracking jokes. He talks about how the world is going to change and convinces her to get the family to leave the cave, from there it’s about “old ways vs. new ways” as the boy and Grug clash over what to do to protect the family.

Sure, as a point of view, the movie encounter along the usual lines of family values, trust and father-daughter relationships, to encourage children to disregard their parent’s safety warnings, but the resolution is actually really touching.

Crostini, Bruschetta, or open faced sandwich, or whatever name you call it, all is just a fancy names for baguette slices that have been brushed with oil, sprinkled with salt and pepper, and baked until golden brown. Crostini, as a small version of bruschetta, makes a perfect choice for parties and gathering, and a good start to any meal as an appetizers or garnishes with foods such as soups.

Crostini served with any topping of your choice makes it perfect as hors d’oeuvres. The creamy garlicy hummus makes a good choice to top with, I prefer the homemade version, but the store bought will serve well too. Top the hummus with a right a mount of lemony flavored tuna that is loaded with sweet crunchy peppers and celery, all on top of crusty toasted little salty bread slices.

Drain the water from the tuna. Place the tuna in a mixing bowl and flake it with a fork. Add the celery, onion, yellow pepper, lemon juice, 2 tablespoons of olive oil, salt, and pepper and mix well. Cover and refrigerate for a few hours to allow the flavors to develop.

Preheat the oven at 300 f. Brush the baguette slices with olive oil, sprinckle with salt and pepper, arrange n an oven sheet, toast until crunchy, for about 10 min.

Let the bread cool, spread each slice with a layer of hummus. Spread the tuna salad on each piece of bread, garnish with slices of radish and cucumber, serve immediately. 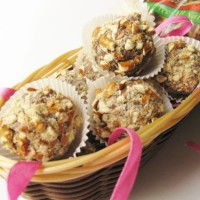